We All Start Somewhere

I don't remember a time that I wasn't fascinated by motorcycles. I have memories of being a small child and being on a bike with my much older brothers. I would sit on the tank - hey, it was the early 70's and kids were still riding in cars with no seatbelts and playing with lawn darts. 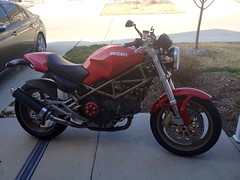 Fast forward many, many years and I met a guy (it happens to the best of us.). He rode a Ducati - a 2000 Monster 900ie to be exact. Her name was Sophia, his Italian Redheaded Mistress. He'd ride over to my house, always arriving apologetically late, smiling. That was the summer of 2009. I never rode with him on the Monster; I had to get my 2 wheeled fix on the back of friends' bikes. It was great fun at the time and I was brought up in a household where 'good girls did not ride motorcycles.' Well, I determined a long, long time ago that I must not be a good girl because I wanted little more than to ride anytime I had the opportunity. But I never got my license or my own bike. 2010 I had planned on doing just that for my 40th birthday present to myself. My body said otherwise - with health issues to deal with, that dream was on hold... again.

August of 2011 Sophia's master sends me an instant message "I think I should get a new Multistrada and you should get a husband." Ha! I got a great laugh over that as we'd never even discussed the possibility of marriage. That was on a Monday; Tuesday I got the same message. By Wednesday it had changed to "Well, did you pick out a ring yet?" I was floored and all I could respond with was "You were serious?!" 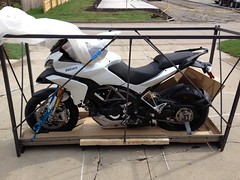 We were married on a cold, snowy, Friday the 13th in January 2012. We waited (un)patiently for Angelica to make her way from Italy and across the states to Iowa. She finally arrived on March 21st.

I spent the entire summer on the back of that bike, but I was still wanting more. The spring of 2013 rolled around and again, I was eager to get out on 2 wheels. In fact, I frequently wanted to ride more than my husband. After one too many "not today" responses to my plea of "Are we going riding?" I had enough. I found the schedule for the local MSF course, paid my fee and announced I was getting my license. We spent an entire weekend looking at bikes in my size range for Rogue is a bit vertically challenged. Everyone had the same suggestion: get a used Honda Rebel, get a small Harley... erm... I'm going to have go with 'no.' Those just aren't my preferences. I'm a sportbike girl. I sat on a Ducati Monster 696 (it was okay, but didn't excite me), I checked out the Honda CBR250RR (no one should ever make that face sitting on a brand new motorcycle), and finally the new Ninja 300. As soon as my hiney hit that seat and I leaned over the tank, I knew I had found my bike. But, I wasn't going to set myself up for heartbreak - I had a course to pass and a license to obtain. 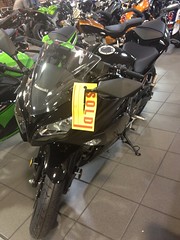 I passed my class the next weekend, went to the local DMV with my pass certificate, took the written test, and just like that I was a fully licensed rider. I was qualified to ride any bike I wanted around a vacant lot! (This will make more sense in a subsequent post.) Off I went back to the Kawasaki dealer where this gorgeous thing just followed me home!

And on May 25, 2013 the Adventures of Rogue began! Well, sorta... they got off to a slow start because there was no way that I, with my parking lot qualifications, was riding a shiny new bike 20 miles home through major traffic during rush hour.